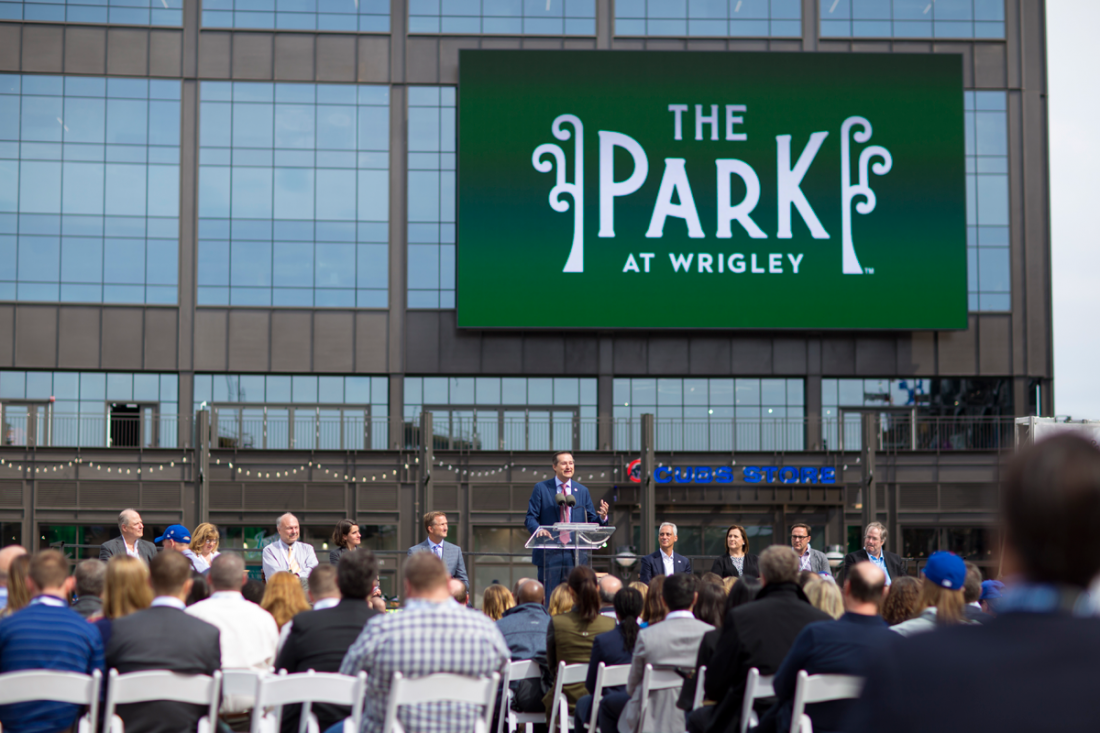 The Park At Wrigley

PWE was engaged to produce the Grand Opening Event, which culminated with a ceremonial ribbon cutting.

On the morning of the Chicago Cubs first Opening Day as World Series Champions in 108 years, the team and Hickory Street Capital (HSC) celebrated the opening of The Park At Wrigley. Located adjacent to Wrigley Field, the newest offering of the 1060 Project campaign is a community-oriented, open-air plaza featuring landscaping, welcoming green space and a playful water feature.

Upon guest arrival, VIPs were credentialed and offered Starbucks Reserve Coffee & delicious Green City Market crepes. Green City Market, a proud partner of the Park, also set up an interactive element where guests had the opportunity to plant seedlings, which signified the beginning of The Park At Wrigley.

Old Town School of Folk Music, another partner of HSC, provided entertainment throughout the celebration. The entertainment consisted of an 8-piece instrumental band that played various songs, including the famous “Go Cubs Go” song as part of the ceremony. Clark the Cubs also made an appearance that added to the excitement of the festivities.

When it was time for the ribbon to be cut, the stage participants including, Crane Kenney, Tom Ricketts & Mayor Rahm Emanuel took their positions and each held branded, oversized scissors ready to make the cut. More than thirty children from the local community were invited to sit on stage in front of the stage participants to be a part of this celebration. 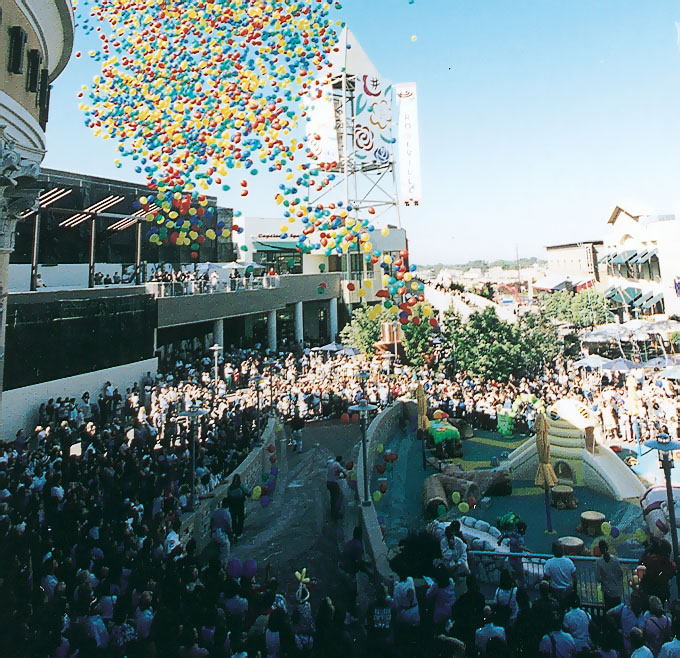 “I have had the pleasure of working with Paulette Wolf Events on several shopping center grand openings all of the U.S., most recently the hugely successful grand opening of The Outlet Shoppes at Laredo in Laredo, TX. Our grand openings are always “Best in Class” with highly diversified elements – both indoor and outdoor – and Mark Liberman and the PWE team always come through for us. They are highly creative, they understand the audiences we are targeting, they are mindful of our budgets, and provide maximum impact. Every last detail is taken care of, and I know I can always trust that the events will be perfectly implemented.” 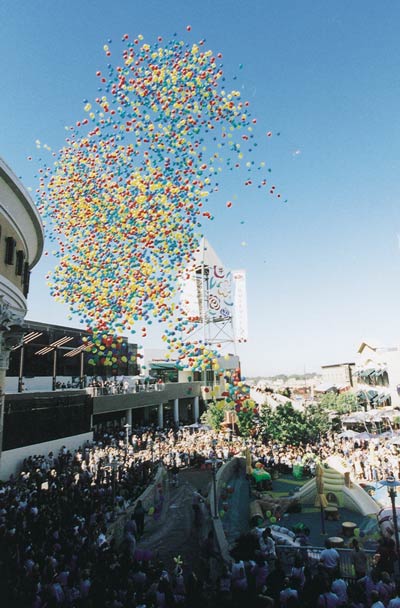 For over 15 years, Paulette Wolf Events has handled and overseen retail and entertainment properties across the nation. Our extensive experience in producing grand openings, ground breaking celebrations, noteworthy holiday events, high-end fashion shows, big name entertainment concerts, and various other mall sponsored events has given us an incomparable understanding and knowledge of events of this nature. 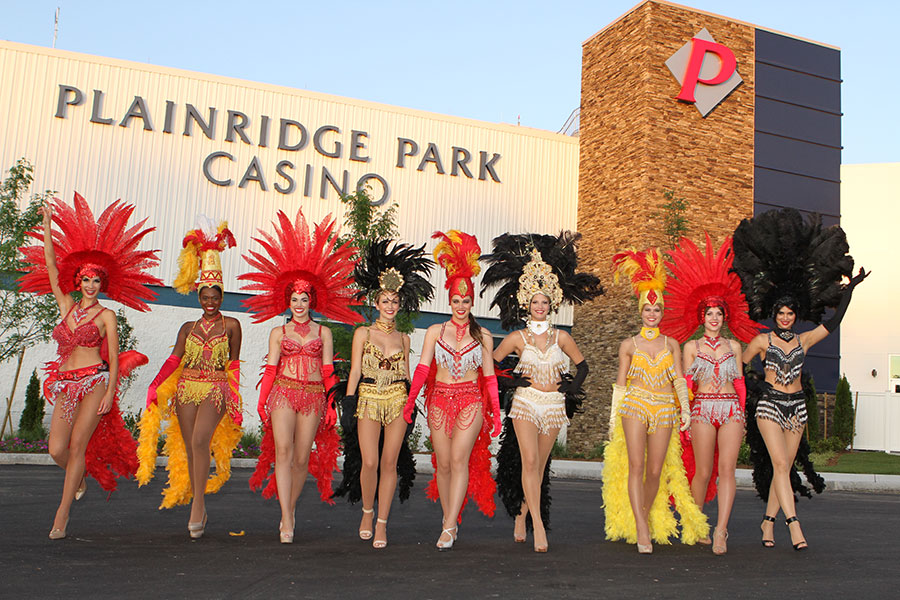 “PWE has been a great partner for Midwest Gaming handling all of our ground breaking and grand opening celebrations as well as booking our live entertainment programming in the Cube.” 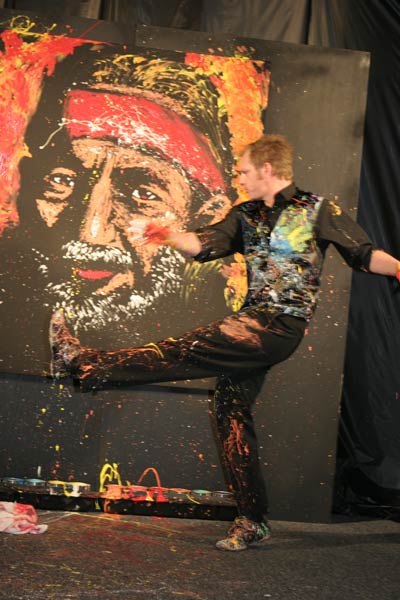 Throughout our 40+ year history, Paulette Wolf Events has managed and produced multiple events within the gaming/casino space nationwide. From ground breakings, grand openings and entertainment production to NYE parties and major mergers, our background and experience in this arena in unparalleled. Our in-depth knowledge and history with casino events allows us to anticipate the needs and goals each casino wishes to achieve. 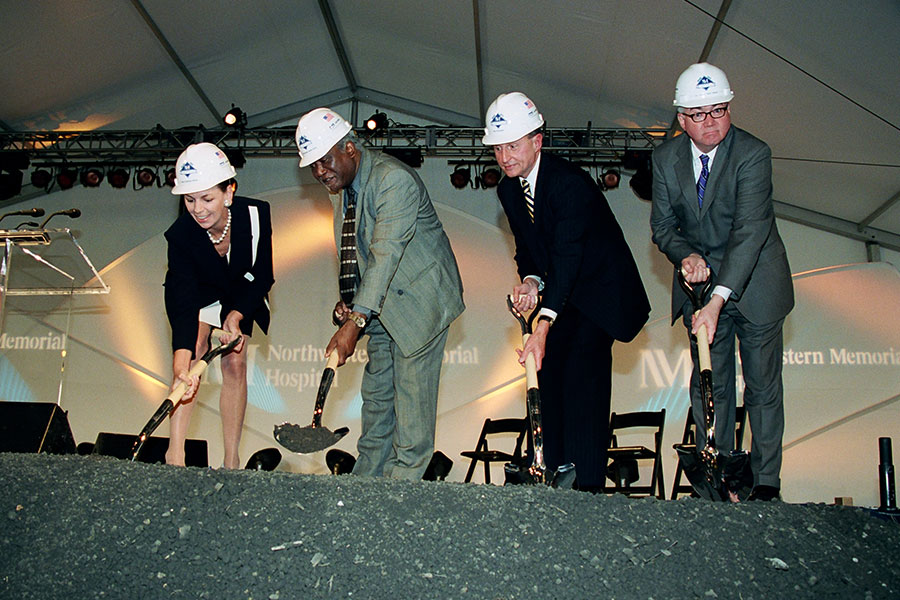 “Many thanks to the team at PWE for their amazing behind the scenes support of the Mission Tour. This event really made a difference as we entered the final phase of The Campaign for Advocate Health Care.” 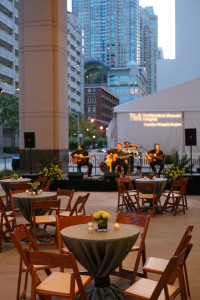 Our hospital campaigns and events serve the unique needs of those clients within the healthcare world. We partner with them on the design and delivery of unique campaign strategies, internal and public programming, special events and sponsorships, board retreats, annual meetings, capital campaign launches, ground breaking ceremonies, topping off ceremonies/dedications & grand opening celebrations.

One of the great values that PWE brings to any collaborative partnership is that we listen carefully to our client to understand their goals.  Our initial process includes a carefully structured brainstorming session that provides all of us with the opportunity to think big and bold. From there, PWE crafts a comprehensive plan that is reflective of our session and one that thoughtfully pairs the ideas with your goals, messaging and budget.

The Park at Wrigley
Casinos/Gaming Entities 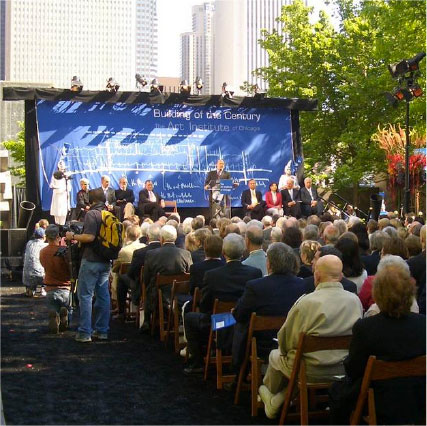 The Art Institute of Chicago

The Modern Wing: The Art Institute of Chicago

“Everything went off without a hitch and was a huge success”— James Cuno (Director & President, The Art Institute Of Chicago) 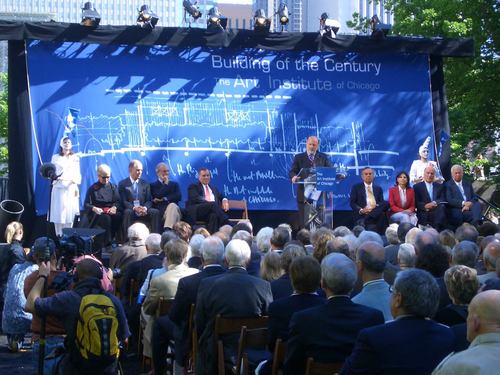 The Art Institute of Chicago hired PWE to produce and design an artistic and entertaining ground breaking ceremony for their Modern Wing – “The Building of the Century,” without actually breaking ground.

Since we were not allowed to use the construction site as our venue, we transformed the North Sculpture Garden to set the stage for the celebration. We brought in our partners from the Superbowl to build risers and staging on top of all of the art and sculptures in the garden to create more real estate for the festivities. The North Garden was transformed into a magical setting with characters on stilts animating the space and entertaining the crowd. The celebrations were accompanied by a performance from the Chicago children’s choir & Chicago Symphony Orchestra. A blueprint for the new building, designed by the celebrated architect Renzo Piano, served as the backdrop to a program that featured remarks by Renzo Piano, AIC President James Cuno & Mayor 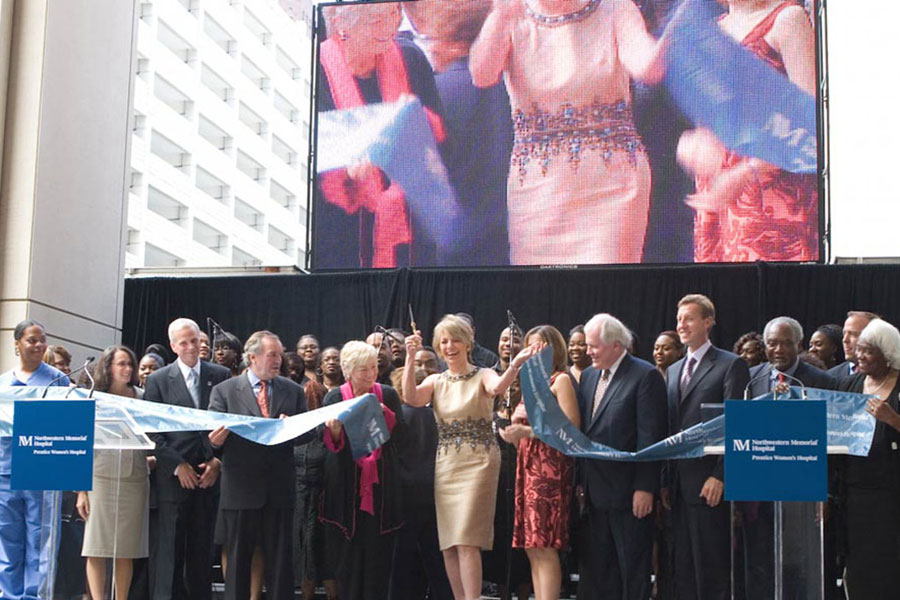 “I cannot imagine that there is a better events planning organization in the country.” 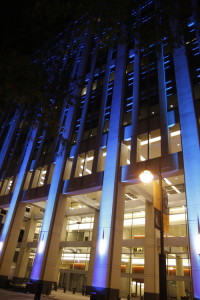 Our objective was to help create brand signature campaigns from ground breaking to grand opening celebrations of multiple hospitals on Northwestern Memorial’s campus.

PWE’s relationship with NMH began in 1993 with the ground breaking of the Galter & Feinberg pavilions. We continued our involvement into the campaign culmination celebration, topping off ceremony and eventually the major grand opening celebration of the new hospital, which encompassed 14 events over 10 days.

We were then invited to be involved in the Prentice Women’s Hospital campaign in 2003 that included a ground breaking, topping off ceremony, family days, tours, construction appreciation days and a week-long series of events including the Grand Opening Gala. Since the facilities’ focus is primarily on women’s health, we decided to concentrate on the feminine spirit as the underlying theme to the various events that we produced. The Groundbreaking Ceremony was held in a tent on the construction site. We surrounded the stage with dirt giving the impression that our speakers were sitting in the middle of a construction site. Following the program, a specially choreographed ballet took place on the dirt, representing femininity and grace, featuring women in all stages of life showcasing what the completed hospital would embody.

The campaign culminated in 2007 with a series of Grand Opening events, including an official building dedication. Held in the building’s driveway, the ribbon cutting ceremony was highlighted by a custom video production of Maya Angelou’s poem Phenomenal Women, read by many of the hospital’s staff and donors representing strength and character of women. Lastly, the black tie gala, the crown jewel of the series of events, featured Aretha Franklin as the headliner. 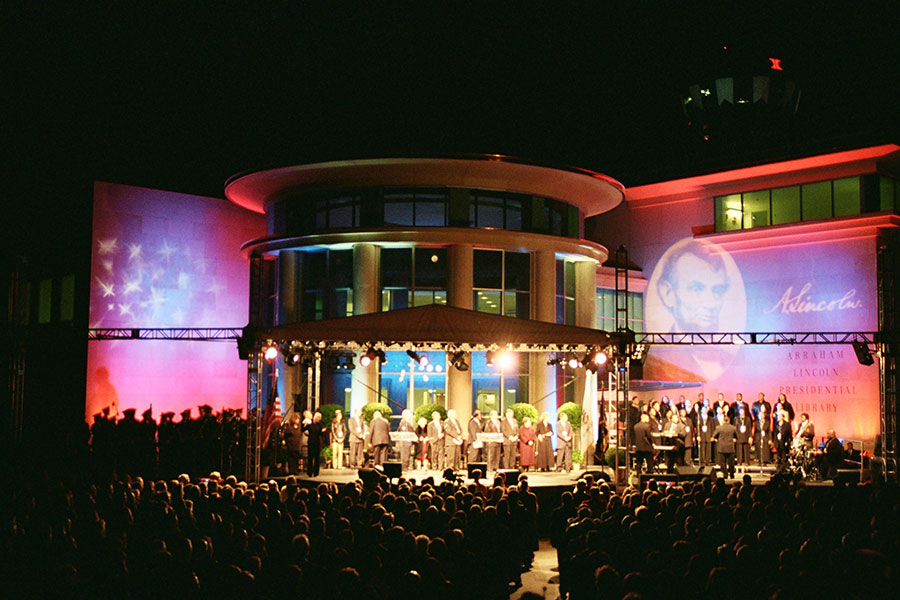 “Your team went above and beyond everyday for us, with every request, with every change – and there were a lot of changes. You really helped us shine, and I can’t thank you enough.” 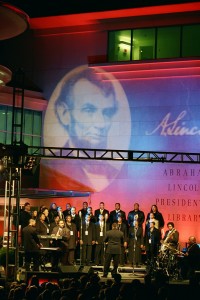 Our principal responsibility was the creative and strategic development of the event, production of the show and on site logistics for the Dedication Ceremony.

We had to create a one-of-a-kind grand opening event for a library that was not opening to the public. Former CNN anchor, Bernard Shaw emceed a public ceremony that featured Speaker of the House Dennis Hastert, White House Chief of Staff Andrew Card, and members of the State Legislature. A flyover by the Illinois Air National Guard 183rd Fighter Wing opened the program followed by 2002 Miss America Erika Harold singing the National Anthem.

This dedication was televised live and in full on C-SPAN, and attracted over 100 news media from all over the world as well as being attended by 1,000 VIPs and 3,000 guests.

A special video tribute commemorating the 139th anniversary of the Gettysburg Address included Presidents Gerald Ford, George H.W. Bush and Secretary of State Colin Powell. Our grand finale was a powerful performance of the Battle Hymn of the Republic by Calvin Bridges and The Chicago Praise Choir and a special effects light show, intertwined with confetti and pyro blasts from the top of this brand new Presidential Library. 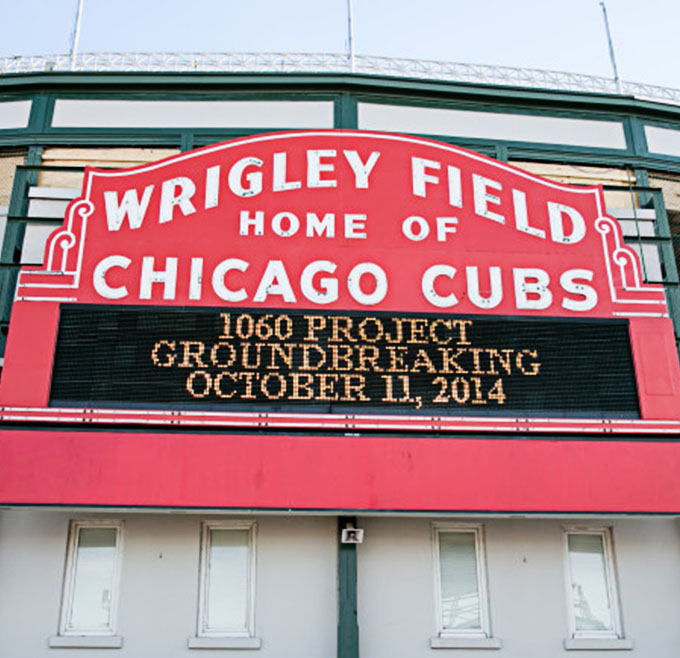 “The Chicago Cubs have enjoyed an on-going collaborative partnership with PWE who has produced world class events like our 1060 project ground breaking and provided first rate consulting services for our new ventures.” 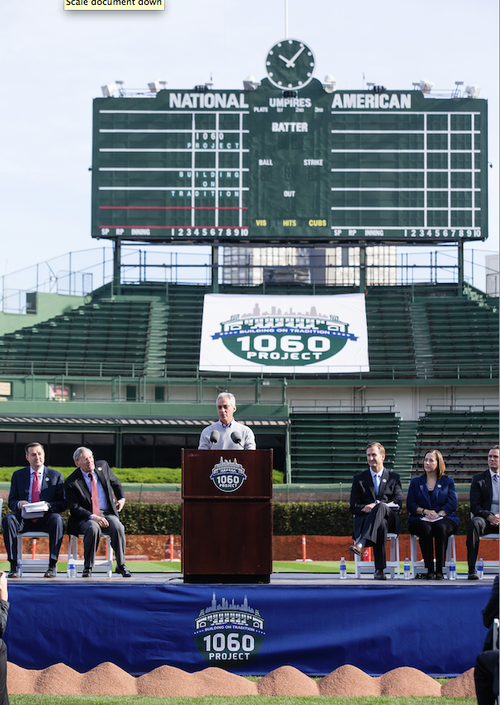 Paulette Wolf Events was tasked by The Chicago Cubs to create a historic ground-breaking ceremony on the field in the midst of major construction for The 1060 Project.

The 1060 Project, a ceremony for Wrigley Field’s long-awaited expansion and restoration, hosted 350 dignitaries, VIP’s, media & Chicago Cubs alumni. This event included a ceremonial dig with baseball bat shovels and a backdrop of the iconic scoreboard surrounded by construction already underway in the outfield.

As the ceremony came to a close, we invited stage participants for the ceremonial shovel dig with shovels made from baseball bats. A lone trumpet player began to play amidst the audience closely followed by two more horn players who were hidden in the crowd. 40 horn players from the upper deck joined in to play the iconic “Go, Cubs Go” song. This cued a kabuki drop revealing the W flag and announcing the conclusion of the ceremony, marking a new beginning for this legendary team and ballpark.